I'm new to the Parish

Seasons of the Church Year 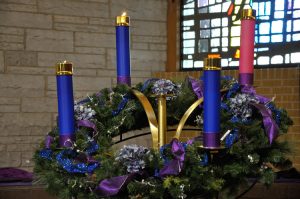 Advent gives us time to slow down and take a look at ourselves—where we are going. As Christian, its gives us a vision of our lives, reminds us of God’s actions in the lives of our ancestors in the past and shows us the new possibilities of what our life can be.

The vision of life that Advent gives us is twofold; it looks back to the first coming of Christ at Bethlehem, and it looks to the future when Christ will come again. In the interval between these two events we find meaning for our life as a Christian.

First, we celebrate Christ-become-human. We view his life and experience his presence as a human being in our history. Christ came to show us what life can and should be. He gave us true and valid principles by which we can live true and valid lives. But Jesus knew that the human heart could not live in isolation. He formed the Church around the concept of a people held together by love. In that community we discover unlimited possibilities and meaning. Alone we can do nothing. Together we find real meaning. 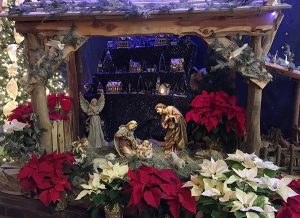 According to Luke, Mary learned from the angel Gabriel that she was with child, by virtue of the Holy Spirit without human sexual relations. Shortly thereafter, she and her husband Joseph left their home in Nazareth to travel to Joseph’s ancestral home, Bethlehem, to enroll in the census ordered by the Roman emperor, Augustus. Finding no room in inns in the town, they set up primitive lodgings in a stable. There Mary gave birth to Jesus in a manger or animal’s stall. Christ’s birth in Bethlehem of Judea, the home of the house of David from which Joseph was descended, fulfilled the prophecy of Isaiah.

Matthew’s gospel begins by recounting the genealogy and virgin birth of Jesus, and then moves to the coming of the Wise Men from the East to where Christ was staying after his birth in Bethlehem. This mentions no trek to Bethlehem from Nazareth, and is often cited as a contradiction, but logically is not contradictory, as it makes no statement that they did not take a journey. The wise men, or Magi, first arrived in Jerusalem and reported to the king of Judea, Herod the Great, that they had seen a star, now called the Star of Bethlehem, heralding the birth of a king. Further inquiry led them to Bethlehem of Judea and the home of Mary and Joseph.

They presented Jesus with treasures of “gold, frankincense and myrrh”. While staying the night, the Wise Men had a dream that contained a divine warning that King Herod had murderous designs on the child. Resolving to hinder the ruler, they returned home without notifying Herod of the success of their mission. Matthew then reports that the family next fled to Egypt to escape the murderous rampage of Herod, who had decided to have all children of Bethlehem under two killed in order to eliminate any local rivals to his power. After Herod’s death, Jesus and his family returned to Bethlehem.

Another aspect of Christ’s birth which has passed from the gospels into popular understanding is the announcement by angels to nearby shepherds of Jesus’ birth. Some Christmas carols refer to the shepherds observing a huge star directly over Bethlehem, and following it to the birthplace. The Magi, who Matthew reports seeing a giant star as well, have been variously translated as “wise men” or as “kings”. They are supposed to have come from Arabia or Persia, where they could have gotten their gifts of “gold, frankincense and myrrh”. Some astronomers and historians have proposed to explain what combination of traceable celestial events might explain the appearance of a giant star that had never before been seen, but there is no agreement among them. 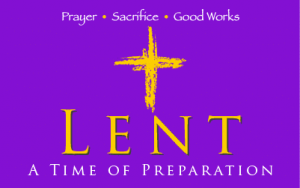 To become like Christ, we must spend each day doing the following three things:
• Prayer
• Sacrifice
• Good Works

Lent starts with a realization of the fact that we are sinners! That is sometimes hard to recognize in our culture, because we “are” our culture and we are so close to the world that everything seems “alright.” We are so much a part of our culture that we don’t see where our culture is opposed to God and His holy way. That is normal! We don’t notice putting on a little weight until we step on a scale. We can be surprised how fast we were really going, when pulled over by the police. We need to check our lifestyle and our actions against the teaching of the Church and the bible.

Sometimes upon looking into to it, we can find that actions that we do as “normal” for the world, but not part of what God expects of his followers. Sin is doing these things and disregarding God’s way.

Our Journey to God, always, but especially during Lent, must start with a confession of our sins. Only after the confession of our faults can we be in a position to move beyond that point. You may say “I didn’t understand those things were really wrong,” but now that you do see the gap between “what you do and what you are expected to do,” you need to change those actions. We will never begin to move on, until we see that actions can separate us from the Lord’s way.

Lent is a movement of heart. It is to a conversion—to change. It must be real; it must be sincere; it must be a decision. Change can’t happen by itself, it can’t happen, if we don’t decide to make it happen. Otherwise, it will only be good intentions.

All Saints and All Souls Days

Why does the Church celebrate this Feast of the Saints?

The Roman Catholic Church celebrates the Feast of All Souls on November 2nd. This feast commemorates the faithful departed in Purgatory. Abbot Odilo of Cluny instituted this celebration in the monasteries of his congregation in 998 AD. Other Religious Orders took up this observance, and it was adopted by various dioceses and gradually by the whole Church.

The Office of the Dead is prayed by the clergy on this day. Pope Benedict XV granted to all priests the privilege of saying three Masses of Requiem on this day. One mass was offered for the souls in purgatory; one for the intentions of the Holy Father; and one for the priest’s intentions.